Text of Ordinance 3274 on Formal and Informal Sewer Connections (PDF)

What does the new City Ordinance #3274 mean to you as a homeowner?

86-163 was developed to provide the city and it's residents with procedures and guidelines to address two different types of residential sanitary sewer connections found in McPherson. The image below will illustrate just what the Code means when it refers to "Common" and "Informal" sewer connections.

From the early days of McPherson's history, the city began installing underground sewers to convey wastewater from homes and businesses to the municipal wastewater treatment facility. Sewers are usually the first utility to be installed in a development since they are the deepest. Sometimes changes were made. Original lots got sub-divided, lot layouts were changed, and property lines shifted, to name a few. Whether this was done with the approval of the City is a subject of debate. Records from back then are often incomplete and documentation was often overlooked in favor of a "handshake". One result of some of these changes was that now not all of the properties have a public sewer main right next to them. Another problem is sometimes a group of homes shared a private lateral system and then were subsequently sub-divided and sold as individual properties.

As the sewer system aged, with much of it being over 100 years old, problems began to appear. Homeowners were faced with replacing their private lateral lines. In many instances the homeowner had no idea where their sewer lateral went. The City does not maintain any records of the locations of private laterals either. The new ordinance details two types of sewer access conditions a homeowner may be faced with.

Using the illustration below, a "Common Sewer Connection" is evident where homes 720 and 722 share a private lateral going to the public sanitary sewer main line. This could also be a duplex under one ownership, a town-home with individual ownership, or multiple properties. The City does not require an existing common sewer to be separated as long as it is fully functional for all the affected properties. Once there is a problem though, a common sewer connection must be separated. If necessary, the City will extend the public main line so that each property will have direct access to the utility.

In the illustration below, property 718 has what is now referred to as an "Informal Sewer Connection". What this means is in order for 718 to access the public sewer main line it must cross the properties of 720 and 722. It is "orphaned" from the main line. There are similar remedies for this type of connection. The City will extend the public main line so that the orphaned property has direct access to the utility. For informal sewer connections there is another option that does not involve the City. If 718 can obtain a permanent easement from 720 and 722 to reach the public main line, or purchase a strip of property from them to provide their own direct access to the public main line, no further action would be required by the City.

The City will only provide a remedy for common and informal sewer connections when problems arise.  The City does not have the equipment or capabilities to locate private lateral lines. The homeowner may have to hire a plumbing service to locate the lines and determine if the lines are shared.

(The image below shows hypothetical connections for illustration purposes only.) 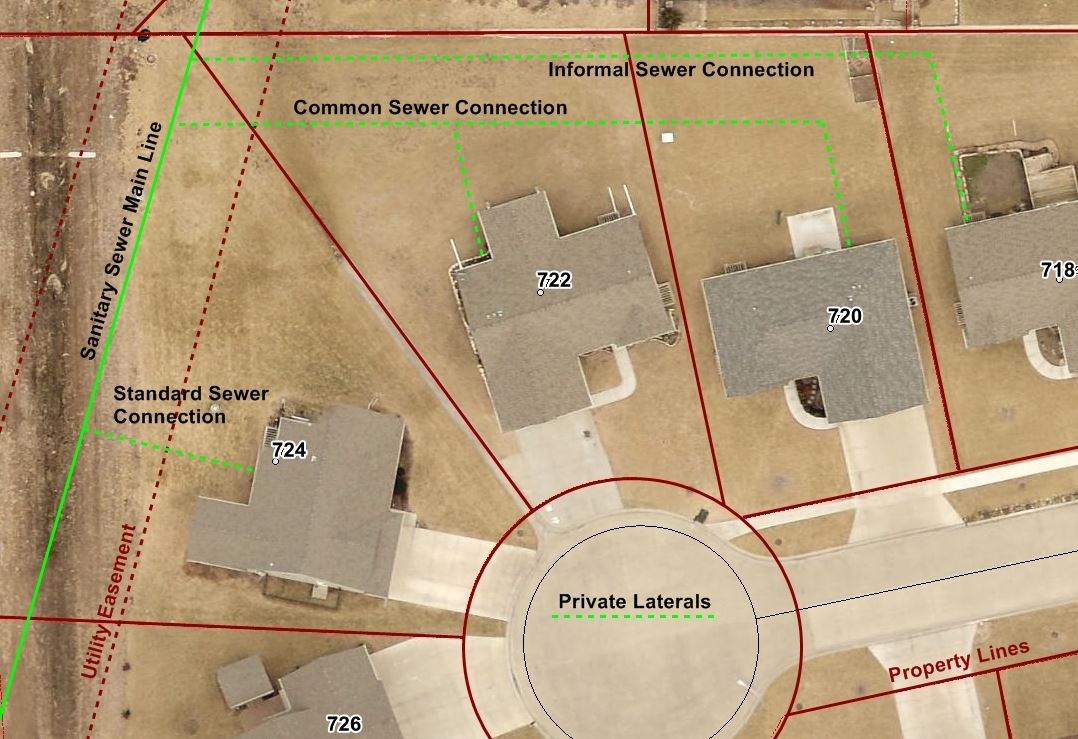 The "Sewer Access Map" and what it means to you.

When the City began seeing connection problems of this type becoming an issue the commissioners asked the question, "How big of a problem is this?" In an effort to determine the extent of connection issues within the city, engineering staff generated a simple map. The query for this map basically was, "Show me all of the properties within the city that do not have direct access to a public sewer main line." The results are what you see. Every blue area in the map indicates that particular property does not have a public sewer right next to it. Now just because your property may be blue doesn't mean you have a problem. It may just need some further investigating. You may have access to the public main via a public utility easement. (not always an available option) You may already have an agreement with your neighbor to go across their yard. (preferably in writing and attached to your title) The area may be under development. And of course the map may be a little out of date. And just because your property is green doesn't mean you still couldn't have a common or informal connection. Your house may have been bulit before a newer closer sewer district was constructed and you are still connected to the old sewer district. Again, nothing that has to be corrected until a problem with your private line arises.

A sample of the sewer access map is shown below. 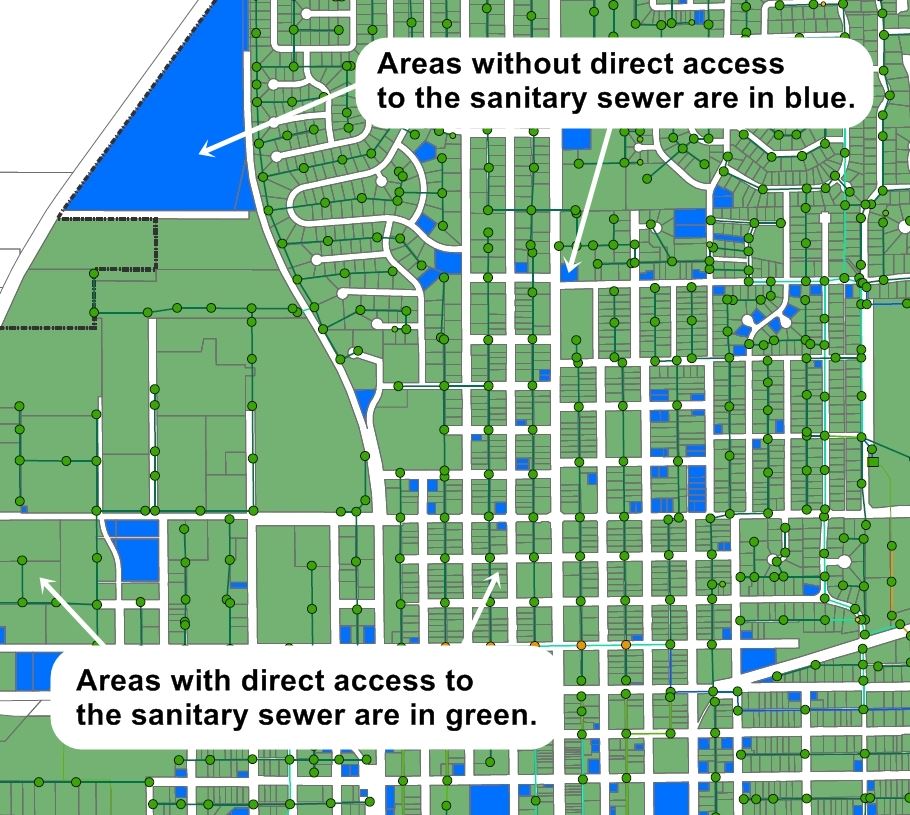